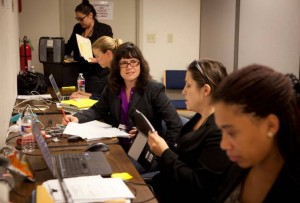 In early 2014, amid a crush of thousands of Central American families caught crossing the border illegally, the federal government expanded the family detention system it had downsized just a few years ago. That set the stage for a remarkable effort to recruit volunteer lawyers from across the United States to travel to remote detention centers and provide legal representation to immigrant adults and children. In 2009, the federal government stopped detaining women and children at a facility near Austin, Texas, following allegations of stark conditions and sexual abuse, and announced that no new family detention centers would be built. Since 2009, women and children seeking asylum had generally not been detained while their asylum cases were pending. In response to the new wave of immigrants, new family detention centers were opened at several locations, including on the site of a law enforcement training center in Artesia, New Mexico, 238 miles southeast of Albuquerque. The Artesia center housed hundreds of women and children who had been detained by immigration authorities.

When immigrants arrive at a detention center, they are interviewed to determine whether they have a “credible fear” of being sent back home. If no credible fear is found, they may be deported, unless that finding is reviewed and overturned. If credible fear is found, a bond hearing is held.  Hearings in Artesia were conducted in an on-site courtroom/trailer, where an immigration  judge appeared via video conference. At the hearing, bond is set; but detainees are released on bond only if they have someone in the U.S. to stay with, and that person must provide proof of a fixed address and proof of income. The money to pay the bond usually comes from relatives or friends of the detainees.

Once the bond has been paid, the woman and her children are permitted to leave the detention center to live with a relative or friend in the United States. An asylum hearing is scheduled in the jurisdiction where the woman and her children reside. If she appears at the asylum hearing, the bond is returned. But the first step for the people detained in Artesia was convincing an immigration judge that they had a credible fear of harm if they were to be sent home.

In July 2014, representatives of the American Immigration Lawyers Association (AILA) visited Artesia and reported observing severe due process violations at the facility. AILA called upon the federal government to suspend all deportations from Artesia until fundamental improvements could be made, and AILA quickly established a pro bono program to assist the detainees. An email went out asking AILA members to volunteer one week of pro bono service in Artesia. A number of Wisconsin attorneys answered the call, including the five interviewed for this article:

By Marsha M. Mansfield and Stacy Taeuber (This article was first published by the Sargent Shriver National Center on Poverty Law and is reprinted with permission.) The Immigrant Justice Clinic at the University of Wisconsin Law School was created in 2012 to provide a sound clinical experience for law students and quality pro bono representation for Wisconsin’s growing immigrant population. The Clinic works closely with the National Immigrant Justice Center in Chicago to represent immigrants in detention and removal proceedings and …

I have Fidel Castro to thank for my encore career. His decision in 1980 to allow thousands of Cubans to board boats departing the Port of Mariel for Florida gave me the chance to sample immigration law. At the time, I was an Assistant State Public Defender in the Appellate Division.

The U.S. government was eager to return to Cuba those Marielitos who were convicted of a crime in America. I was part of a committee of pro bono attorneys who represented individuals from this group in deportation proceedings before the Immigration and Naturalization Service (INS).

When I retired from the State Public Defender’s Office, I wanted to use my legal skills to help people, but I did not want to have a new job. I read an article about the Community Immigration Law Center (CILC) in Madison and found that my interest in immigration law was still smoldering. Much had changed since my isolated foray into immigration law (INS no longer existed; there was a new alphabet soup with ICE, CPB and USCIS.) I audited Immigration Law taught by Attorney Grant Sovern at the UW Law School and began volunteering at CILC’s walk-in clinic at Christ Presbyterian Church in Madison.

Catholic Charities of the Archdiocese of Milwaukee created its Legal Services for Immigrants (LSI) program to provide legal services and outreach for the marginalized and vulnerable undocumented immigrants who live within the Archdiocese. Three staff attorneys and two paralegals maintain a caseload of 2,000-3,000 clients. Our staff are bilingual in Spanish and English. LSI provides representation before the Board of Immigration Appeals, the Executive Office for Immigration Review in Chicago, the Chicago asylum office and the Milwaukee office of United States Citizenship and Immigration Services (USCIS).

The practice of immigration law is both interesting and irritating. Federal judges have compared immigration law to King Minos’ labyrinth in ancient Crete and have commented that its sole purpose seems to be to accelerate the aging process of a judge. Self-representation is rarely a viable option. The difference in success rates between the represented and the unrepresented is staggering.

Access to justice requires a steady commitment of time, money and effort.  Members of the commission are all volunteers and donate a considerable amount of their time every month. But everything else that we do to support and expand access for Wisconsin residents has some cost. We need your support in the manner that best fits your resources, your time and your experience.