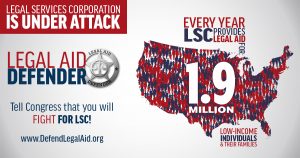 Today, the President released his budget framework, including a proposal to eliminate the Legal Services Corporation, the largest single national funding source for free civil legal assistance to low income Americans. The Wisconsin Access to Justice Commission strongly urges Congress to continue its longstanding bipartisan support of LSC and reject this budget proposal. Eliminating LSC would undercut America’s promise of equal justice for all and harm our state justice system.

In Wisconsin, LSC provided $5.2 million in 2016 to two organizations, Legal Action of Wisconsin and Wisconsin Judicare, allowing them to provide free legal information, advice, and representation on civil matters to over 9,000 low income Wisconsin residents in cities, towns, and villages across Wisconsin. Together, these two organizations help people who have basic civil legal problems with their housing, children, safety, health care, and incomes.

“I felt hopeless until they stepped in.” “This service kept me from becoming homeless and bankrupt.” By Beth Richlen, Development Director, Wisconsin Judicare For 50 years, Wisconsin Judicare has provided legal services to individuals like these in northern Wisconsin. From Stevens Point to Superior, from Hudson to Marinette, and everywhere in between, the low-income residents of northern Wisconsin face difficult challenges, including equal access to justice.  Questions about how to obtain the return of a …

This story in the National Law Journal is just the latest example of how legal services programs and even legal services funding organizations are emphasizing the social “return on investment” that is generated by the work that they do. From the article: Page 14 of Legal Services Corp.’s proposed 2014 budget request to Congress bears the face of a 7-month-old infant wearing a baby helmet to form his skull. He represents a boy (identified by …

Last night House and Senate conferees agreed to a spending package that would fund the Legal Services Corporation (LSC) at $348,000,000 for FY 2012. This figure represents a reduction in overall funding for LSC of $56,190,000, or 13.9 percent.  The entire cut comes from funding for basic field programs, amounting to 14.8 percent of the critical funding used by LSC grantees to provide access to justice in the United States. The figure represents a split in half of the difference between the level the Senate appropriated for FY 2012 of $396.1 million and the House level of $300 million.

It appears that, despite a heavy educational campaign by supporters of legal services aimed at conservative members in the House, the pressure on House Republican conferees resulting from the earlier deep cuts in the House appropriations bill led to their insistence upon this level of cut before they would agree to a final overall spending deal funding the Commerce, Justice and Science functions of government.  Despite the expressed strong support of conferees Barbara Mikulski and Kay Bailey Hutchison in the Senate, and Chaka Fattah in the House, the intransigence of House leadership on this issue led to the unfortunate compromise resolution.

The package is expected to pass the House and Senate this week. The Conference Report containing the agreements is not open to amendment on either the House or Senate floor. Thus, the LSC figure contained with the Report is likely to be the final spending figure for FY 2012.

What does this mean for Wisconsin?  The short answer is that Wisconsin is likely to lose over $700,000 in federal funding that would have helped thousands of vulnerable Wisconsin residents to resolve their legal issues affecting basic human needs for shelter, safety, food and employment. Life is is about to become a little bit tougher for the poor, the elderly, the disabled and others facing unlawful evictions, lending abuses, domestic violence or barriers to employment.

In the midst of the greatest economic meltdown in a generation, Congress is poised to cut 2012 funding for the federal Legal Services Corporation (LSC), the largest single funding source for civil legal services to the poor. LSC funds a national network of nonprofit law offices who leverage their staff and volunteers along with other funds to provide free civil legal services to low income individuals.  The Senate recommendation of a 2% cut to LSC’s appropriation is more moderate than the extreme 26% reduction proposed in the House but neither would provide what LSC needs to accomplish its mission. [More on what you can do below]

LSC grantees provided vitally important services to low-income Americans in almost 1 million cases last year. Legal Action of Wisconsin and Wisconsin Judicare, our two LSC grantees in Wisconsin, handled over 9,900 cases using LSC funding last year. Still, the data shows what a history of underfunding LSC means for those who desperately need legal help: legal services offices must consistently turn away one eligible potential client for every one that they are able to serve. Nationwide, that adds up at least 1 million of people who go unserved and millions more in the same household who are also adversely affected.

Wisconsin would suffer more than most from a cut in LSC funding. It would compound the devastating impact of the Wisconsin Legislature’s total elimination of state funding for civil legal services to the poor in Wisconsin.

The federal Legal Services Corporation reported today that the recent budget deal between the White House and Congress includes a cut of $15.8 million (3.8%) in funding for LSC in the current fiscal year. Wisconsin’s two LSC grantees, Legal Action of Wisconsin and Wisconsin Judicare would lose collectively lose approximately $189,00 in funding if the agreement is approved by Congress and signed by the President. Update: Together, Legal Action and Judicare provide basic civil legal …

Access to justice requires a steady commitment of time, money and effort.  Members of the commission are all volunteers and donate a considerable amount of their time every month. But everything else that we do to support and expand access for Wisconsin residents has some cost. We need your support in the manner that best fits your resources, your time and your experience.