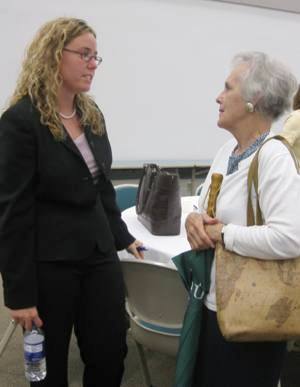 Seniors are among those affected

In the midst of the greatest economic meltdown in a generation, Congress is poised to cut 2012 funding for the federal Legal Services Corporation (LSC), the largest single funding source for civil legal services to the poor. LSC funds a national network of nonprofit law offices who leverage their staff and volunteers along with other funds to provide free civil legal services to low income individuals.  The Senate recommendation of a 2% cut to LSC’s appropriation is more moderate than the extreme 26% reduction proposed in the House but neither would provide what LSC needs to accomplish its mission. [More on what you can do below]

LSC grantees provided vitally important services to low-income Americans in almost 1 million cases last year. Legal Action of Wisconsin and Wisconsin Judicare, our two LSC grantees in Wisconsin, handled over 9,900 cases using LSC funding last year. Still, the data shows what a history of underfunding LSC means for those who desperately need legal help: legal services offices must consistently turn away one eligible potential client for every one that they are able to serve. Nationwide, that adds up at least 1 million of people who go unserved and millions more in the same household who are also adversely affected.

Wisconsin would suffer more than most from a cut in LSC funding. It would compound the devastating impact of the Wisconsin Legislature’s total elimination of state funding for civil legal services to the poor in Wisconsin. In April, federal funding for LSC for the remainder of fiscal year 2011 was reduced by 4% (or roughly $15 million) as part of the budget deal that forestalled a government shutdown. Now, committees in both houses of Congress have recommended appropriations that would reduce LSC’s 2012  funding and services even further.

In July, the House Appropriations Committee proposed cutting LSC funding for 2012 by 26%, from $404 million to $300 million. At the time, LSC noted the destructive impact that proposal would have nationwide:

LSC’s preliminary estimates show that about 235,000 low-income Americans eligible for civil legal assistance at LSC-funded programs would be turned away if the Committee proposal were enacted.

“The proposed cut would prove to be especially damaging to low-income persons whose health and safety are at risk—the elderly, the victims of domestic violence, the disabled, children, veterans and others—by denying them access to justice,” LSC President James J. Sandman said.

“At LSC programs, requests for assistance are increasing. The poverty population eligible for civil legal assistance has grown by 17 percent since 2008, to an all-time high of 63 million Americans. And funding from non-federal sources is decreasing. This is not the time to undercut the fundamental American commitment to equal justice for all,” Mr. Sandman said.

The final level of funding for LSC will likely emerge from negotiations between the House, Senate and White House. Unless policymakers can be persuaded otherwise, the outlook on funding for LSC is not good in 2012 and worse still in 2013 (the White House is already urging federal agencies to reduce their 2013 budget requests).

With poverty, unemployment, foreclosure, homelessness and hunger at record levels, the safety net is already badly frayed. Our “threadbare” court systems are already overwhelmed by by the aftereffects of these and other developments. Add in thousands more low-income individuals who are left to navigate the legal system or protect their rights or property without help and it becomes clear that continuing the pattern of creeping cuts in funding for LSC will only make a bad situation much worse.

What can you do? You can share your concerns about funding for the Legal Services Corporation with those who represent you in the House and Senate. The relevant bills are H.R. 2596 in the House and S. 1572 in the Senate.

[Update 9/26/11] We now have a simple tool here that you can use to contact your member of Congress about the House proposal to cut LSC funding.