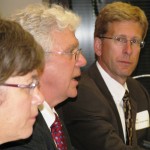 It was a remarkable evening in Eau Claire. Members of the community came out on July 31 to share their thoughts about the state of access to justice in the area. Representatives from domestic violence prevention groups, the court system, legal services organizations, the faith community and the private bar concurred that the needs they see are growing. Rosemary Elbert, Executive Director at Wisconsin Judicare noted a fundamental her organization faces in trying to meet the civil legal needs of the indigent in northern Wisconsin: “The funding is going down. The needs are going up.”

Judge Sherman pointed to information provided by the Wisconsin Trust Account Foundation (pdf)  showing the dramatic decline in the funding they have available to support organizations providing civil legal assistance to the poor. The foundation’s income from the interest on lawyers trust accounts has collapsed over the last few years as interest rates declined to historic lows. Public funding that had been distributed through the foundation was eliminated from the current state budget last summer. The one bright spot has been the mandatory $50 fee paid by all Wisconsin lawyers and judges to help fund civil legal services to the indigent.

Speakers from legal services agencies and free legal clinics noted that individuals with issues related to family law, including domestic violence, continue to be the largest group seeking help from attorneys in the area. One volunteer lawyer noted that as recently as ten years ago, it was possible to refer low income individuals with a critical civil legal need to a legal services agency for more intensive help than could be offered at a free legal clinic. That’s not the case anymore, because funding for those agencies has declined so much that they they have cut back drastically on eligibility for extended service cases. They are “slipping through the cracks” in our justice system, according to Beverly Wickstrom, a volunteer attorney with the Eau Claire Free Legal Clinic.

Gerald Wilkie, director of Bolton Refuge House, an organization that serves abuse victims in Eau Claire, Buffalo and Jackson Counties, highlighted the unfairness of the situation he sees too frequently:  the alleged abuser has an attorney but the victim is unrepresented, because she no longer has access to the resources necessary to hire an attorney and Judicare lacks the resources to provide her with the help she needs. Erica Ellenwood, with the Center Against Sexual & Domestic Abuse in Superior, expressed similar concerns for abuse victims in the far northwestern part of the state.

Bob Henderson from the La Crosse office of Legal Action of Wisconsin noted that his office is down to only two staff attorneys to cover all of the civil legal needs of the indigent in a ten county area. As Henderson noted, there are some cases where the availability of a form or a brief consultation in a legal clinic is a poor substitute for legal representation by an attorney:  when important rights are at stake, the proceedings are complicated and the client is incapable of self-representation.

Emily, a grandmother in Eau Claire, shared her struggles and her fears as she tried to navigate through the legal system without a lawyer to advise her and her son as they sought to protect her grandchildren after the children were removed from their mother’s home.

A number of witnesses offered ideas on how to improve the situation for civil legal services. Additional public and private funding was a frequent suggestion. Steve Gibbs, District Attorney in Chippewa County, and regular volunteer at the Chippewa Valley Free Legal Clinic, emphasized the need to strengthen incentives for pro bono service by attorneys as one strategy to help close the justice gap for people with civil legal problems.

Mike Rust, with ABC for Rural Health in Balsam Lake, shared suggestions for reducing the numbers of low income fathers being pursued by the State of Wisconsin to recover birth costs for children born to unwed mothers receiving Medicaid services. Even when the cost is assessed against the true father of the child, it tends to create a cascade of related legal proceedings against the father which harms the best interests of the child by draining money away from the father that could be used to support the child.

It has been especially gratifying to see the excellent response from area news organization covering this story on the crisis in providing equal justice for all in northern Wisconsin:

The problem affects and should concern us all. The solution will take action from us all.