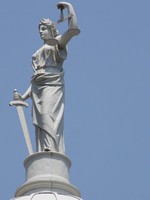 The Wisconsin Supreme Court has released its final order denying Petition 10-08. The justices voted last month to deny to petition. Petition supporters asked for a new rule that would have required circuit court judges to appoint counsel at public expense for indigent litigants in many civil cases where basic human needs were at stake.

Citing uncertainty about the scope and cost of the proposal, the court declined to adopt the proposed rule. The justices also noted the continuing validity of their previous decisions on the inherent power of Wisconsin courts to appoint counsel in some cases:

We decline to grant the petition and supplemental petition, which do not fit within SCR 11.02. The parameters of the proposal are difficult to discern and the effect of the proposal on circuit courts and counties is largely unknown but may be substantial.

Prior to denying the petition, the court discussed the possiblitty of a various types of pilot projects that might provide more information on the costs and benefits of appointing counsel in some civil cases. The Access to Justice Commission responded that it was willing to investigate such a program or study. Therefore, the final order also includes this reference to the Commission’s efforts:

A number of states are exploring civil right to counsel pilot projects, some using public funds and others using private funds. The most advanced and well funded program is in California. There, the Legislature adopted and the Governor signed  AB 590 to provide approximately $9.5 million per year for three years to fund a series of pilot programs that are overssen by the Administrative Office of the Courts.  A recent news report suggests that San Francisco County’s Board of Supervisors, led by Supervisor Chiu (pdf), may soon adopt its own local initiative to fund legal counsel for the indigent in some civil cases.

Without public funding, any project in Wisconsin is likely to be much more limited. A working group of Commission members and other interested groups is reviewing a range of design and evaluation issues. Individuals who would like to assist the working group with this project should contact us.