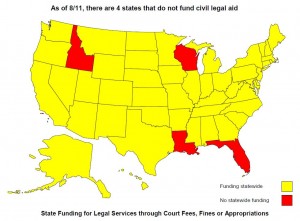 When the Wisconsin Access to Justice Commission meets on Friday it will be bittersweet due to the refusal by state legislators to take action that would remove Wisconsin from the list of only four states that provide no state funding to support civil legal services to the indigent. Volunteers from the Commission worked with staff from the State Bar of Wisconsin and representatives from numerous other organizations to develop a proposal that would have provided a small amount of state funding to meet the legal needs of abuse victims. You can read more about the Commission’s proposal here. Although there was some bipartisan interest and support for this proposal, a majority of Joint Finance Committee members were opposed. The only recorded vote was a 12-4 party line vote against a different proposal from Rep. John Richards (Richards Motion 492 and Richards Motion 493).

To get a sense of the opportunity that was missed, take a moment to consider this example of the difference that access to civil legal services made for “Jennifer.” She was a child sexual assault victim who was raped by a family member and needed the help of a lawyer to prevent Wisconsin’s legal system being used by her rapist to victimize her again in connection with the child that resulted from the assault. How have our actions measured up against our expressions of concern and support for the rights of victims and justice for all?

It’s what we do in life that matters, not what we say. Associate Justice Jess Dickinson on the Mississippi Supreme Court is fond of asking law students to think about a simple question: What makes America great? When they respond by pointing to particular elements of our Constitution, he points to much loftier provisions about justice, equality, human rights and the rule of law enacted by a variety of repressive regimes throughout history. The point of the exercise is to lead students towards an understanding that it is not the words on paper that matter, it’s what we actually do that affects people in their daily lives.  The rule of law, equality, fairness and justice are meaningless if there is no ongoing commitment to ensure that they are accessible and enforceable.The existence of an independent judiciary along with court decisions and laws that provide a meaningful opportunity to be heard are key features that make the American experiment so remarkable. 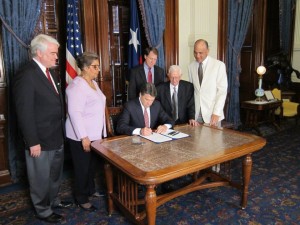 State investments in civil legal services funding is the norm across the country. It is a supplement to the financial contributions made by every other equal justice stakeholder: attorneys, judges, other individuals, banks, private foundations and the federal Legal Services Corporation. In states as diverse as Mississippi, Texas, Washington and New York, legislators from both parties agree that the state government has a shared responsibility to provide financial support that helps to ensure that the most vulnerable state residents have at least some basic access to legal advice and representation to resolve civil legal problems that threaten basic human needs. In a tragic irony, at the same time that Wisconsin’s Joint Finance Committee was backing away from bipartisan support for civil legal services, a bipartisan group of Texas Legislators and Governor Rick Perry took giant steps in the opposite direction. As Texas Supreme Court Justice Nathan Hecht has noted: “Access to justice is not a partisan issue. At stake is nothing less than the integrity of the rule of law.”

Our legislators are capable of working together to produce bipartisan solutions to important problems. The Joint Finance Committee voted unanimously to support a variety of funding priorities in the 2012-2015 state budget, including, notably, funding for walleye. Access to justice needs similar heroes. The State of Wisconsin missed an opportunity to be a leader when it comes to ensuring that abuse victims receive the legal help they need. But it’s never too late to stand up for justice.

In a show of bipartisan support for federally funded civil legal services, the Senate Appropriations Committee yesterday approved $430 million for the Legal Services Corporation (LSC) in FY 2014. This amount represents a $90 million increase over LSC’s current funding level, and is consistent with the White House budget request for FY 2014.

“We want to thank Senators Mikulski and Shelby for showing such strong leadership and support for LSC, and for recognizing the importance of federally funded civil legal aid,” said LSC Board Chairman John G. Levi.

Filed Under: Funding, News
← Time to Make Legal Assistance for Abuse Victims a Priority
The return on investing in access to justice →