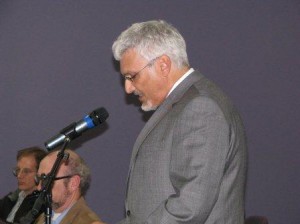 On September 13 in Milwaukee and then again on September 18 in Madison, local community members, judges, lawyers, social services agencies and others gathered to share their experiences in providing or finding civil legal assistance for low income people in Wisconsin.

The Access to Justice Commission is entering the home stretch for its series of regional access to justice hearings. The hearings began on July 24 in Green Bay and continued in Eau Claire on July 31. September’s hearings were in Milwaukee and Madison. The next hearings will be held in Wausau (October 2) and La Crosse (October 16).

Some common themes have already emerged from the testimony. The scale and complexity of the challenges we face in providing equal justice to all without regard to income is daunting. There are signs of hope and good ideas for how to move forward can be found in many places.

Clearly, the elimination of state funding for civil legal services to the indigent is widening the justice gap for low income people in Wisconsin. The legal aid system can only do more with less for a time; funding cuts and layoffs mean that they must now do less with less.

But the problems and the solutions go beyond money. As one speaker with a state agency noted, her office modified its processes for gathering evidence and informing participants of their rights as part of an effort to become more user-friendly for people who don’t have lawyers. Many witnesses spoke about the value of having volunteer lawyers and free legal clinics serving their communities. Recruiting and retaining more volunteer attorneys for these projects will take more than money. At the same time, lawyers who provide pro bono service acknowledge that they are only one piece of a larger system. Other speakers have highlighted the vital access to justice role played by people who are not lawyers – domestic advocates and benefits specialists. Social workers and clergy have described the desperate situations they encounter when they have nowhere to refer the people who come to them for help. Judges and court clerks have told us about the overwhelming challenges they face in the courthouse when people are forced to represent themselves in complex and high stakes legal matters. Some judges have even responded by appointing attorneys at county expense to represent indigent parties in civil cases.

What follows is not an exhaustive list of all the points raised at the two most recent hearings but rather a sampling of the range of issues and ideas that were put forward.

Milwaukee speakers ask whether we are moving in the right direction

In Madison, “There are choices to be made”

Our choices have and will continue to say a great deal about the value we place on providing equal justice for all. The Access to Justice Commission will continue to do its part to help move everyone forward.