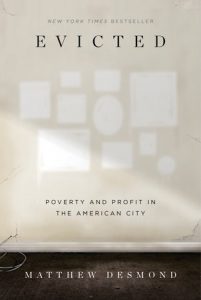 Desmond described three factors contributing to the rise in evictions: between 2001 and 2010, median rents increased by approximately 21 percent in the Midwest, and utility costs increased by 53 percent, but incomes rose only 6‒7 percent for households headed by people without a college education. According to the  Milwaukee Area Renters Study, which analyzed the number of renters involuntary displaced by formal and informal evictions, one in eight (13 percent) Milwaukee renters was involuntarily displaced from housing in the two years prior to being surveyed. Nearly half (48 percent) were informal evictions and 24 percent were formal evictions. The remaining 28 percent were due to landlord foreclosure or building condemnation.

What can be done?

A recent New York Times article looks at the impact of several of these proposals, including legal assistance to tenants. Court data shows that evictions in New York City dropped by 18 percent in 2015, to their lowest level in a decade, after the city allocated $46 million for legal services for tenants. In Boston, the effect of providing legal assistance to tenants was even more dramatic; tenants were twice as likely to avoid eviction if they had legal help. Lawyers negotiated time for payment of back rent, challenged overcharges and took landlords to court in cases in which problems have been neglected or tenants have been harassed.

The Access to Justice Commission was created with a mission to to develop and encourage means of expanding access to the civil justice system for unrepresented low-income Wisconsin residents. Courts face enormous challenges in handling a growing number of self-represented individuals facing life altering legal problems, often against parties represented by lawyers, including evictions. Lawyers and other forms of legal assistance for tenants can help increase access to justice and reduce that burden on the court system. A family that is less economically stable after eviction is also more likely to require more social and economic supports from local or state government for emergency housing, food, and transportation. If providing access to legal assistance can help to reduce these costs, then Wisconsin is better off overall.