Catholic Charities of the Archdiocese of Milwaukee created its Legal Services for Immigrants (LSI) program to provide legal services and outreach for the marginalized and vulnerable undocumented immigrants who live within the Archdiocese. Three staff attorneys and two paralegals maintain a caseload of 2,000-3,000 clients. Our staff are bilingual in Spanish and English. LSI provides representation before the Board of Immigration Appeals, the Executive Office for Immigration Review in Chicago, the Chicago asylum office and the Milwaukee office of United States Citizenship and Immigration Services (USCIS). 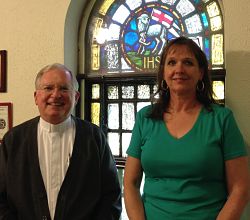 The practice of immigration law is both interesting and irritating. Federal judges have compared immigration law to King Minos’ labyrinth in ancient Crete and have commented that its sole purpose seems to be to accelerate the aging process of a judge. Self-representation is rarely a viable option. The difference in success rates between the represented and the unrepresented is staggering. LSI is fortunate to belong to the Catholic Legal Immigration Network (CLINIC), which is a subsidiary of the United States Catholic Conference of Bishops (USCCB). CLINIC provides technical support and staffs a toll-free hotline that is staffed by nationally-recognized experts in immigration law and program management. CLINIC also provides continuing legal education credits and updates.

LSI’s case mix constantly changes in response to global crises.  For example, over the past year there has been a 130% increase in asylum claims from Mexico. Many of these asylum claims are based on having been a domestic violence victim. We have seen a surge in children fleeing violence in Honduras, El Salvador and Guatemala. These children may be eligible for either asylum or a less typical form of relief called Special Immigrant Juvenile Status (SIJS).  LSI would typically see one or two SIJS cases each year; we are now getting several each week. SIJS requires either a guardianship or a Child In Need of Protection (CHIPs) petition. USCIS, however, requires specific and atypical language in the CHIPs or guardianship order. This, in turn, means that LSI is branching out into appearing before the State of Wisconsin courts. LSI devotes significant resources to representation of immigrant victims of domestic violence and crime. We represent victims in deportation and those trying to obtain lawful permanent residence for their family.

Our outreach programs at LSI provide free, bilingual information throughout the ten counties of the Archdiocese.  Our goal is to ensure that people can distinguish between the newest immigration rumor and reality.  For example, a few years ago, there was a rumor about a “California amnesty.” Someone convinced a few undocumented immigrants to complete real USCIS forms and to mail the completed forms to USCIS. Each person who applied ended up in deportation proceedings. Another rumor is that anyone who has been in the United States for ten years can apply for lawful permanent residency. When USCIS announced the Deferred Action Status for Childhood Arrivals (DACA), there were rumors about filing deadlines, fee waivers and renewals. However, working through parishes and community groups, we were able to reach 3,000 people in a fairly short time. So many people came to our second presentation that we could not fit them into our building. Rather, we had 270 people in the front yard. We ended up using the adjacent parishes’ church because our building could not hold everyone. We also have an anti-fraud campaign. Our goal is to ensure that that the unscrupulous don’t prey on unsuspecting immigrants. Our anti-fraud campaign includes a monthly newsletter on our website, as well as visits to schools, churches and community groups.

The Pew Hispanic Center estimates that 85,000 undocumented people live in Wisconsin. Very few undocumented are eligible for federally-funded legal services:  not the asylum applicants who fear persecution at home, not the detainees who live in rented county jail space, and not the abandoned Central American children who cannot go home because of abuse, neglect or abandonment. Many come to the United States not because their life will be better, but because life will be possible.